"You're boring! Completely and utterly boring!" That's what the doctor had to say when I saw him more than two weeks ago. My labs were perfect, my knee xray was unremarkable and my ears were clear as can be. He suggested I try a decongestant to resolve the crackle I described in my ears. I've never been so disappointed to have a clean bill of health. If I'm perfectly healthy, then, why do I feel so shitty?!

I popped Advil Cold and Sinus the whole weekend, the crackle improved, but the pressure was unbearable. The following Tuesday, I went in to see the TMJ dentist. I supplied him with my laundry list of complaints and he adjusted the appliance, applied some suture release techniques, and suggested a nightly dose of Vitamin C. It didn't provide much relief, but the adjustment stopped me from biting my tongue so that ulcer has been able to heal. The following day, I felt like I busted my face - like my skull had fractured. I was miserable. Later that night, I teared up watching "600 LB Life" and then my nose started to drip.

Thursday, I was so congested, I felt I was underwater. I went into work, only to be sent home. That afternoon and the next four days are a blur. I rotated between the recliner and spare bed propped up on half a dozen pillows. I wanted to keep the sickness out of my chest. I tried all sorts of OTC medicine and finally (last) Monday, I threw in the towel and wanted to see a doctor. The local quick care clinic had a wait of 90 minutes, while on their site I noticed an ad for the NOW Clinic which touted no waiting via virtual appointment. It sounded good to me! No leaving the house, no wait, no exposure to an even worse virus or the flu. Sign me up! Of course, the registration was flawed. I couldn't create an account because it claimed one existed, when I tried to resend the username/password it said the account didn't exist. I called the number and held for 33 minutes. A gentlemen solved the problem and kindly waited on the line until I was able to successfully login. Then, $10 and 8 minutes later I was connected with a doctor in Florida. We Skype, I tell him I'm convinced that my cold has turned into a sinus infection, but he insisted I have the virus that everyone is getting coast to coast. He asked who at work or at home is sick? A few coworkers caught cold over Christmas and New Years break, but that's about it. Maybe I picked it up at the doctors office on the 12th? Who knows? I just want to feel better. No antibiotics, but he'll call in some RXs stronger than my OTC medicines. I sent Frank to the pharmacy to pick up my prescriptions, he came back with the same strength decongestant I was taking, 600 mg of Ibuprofen and Promethazine. That was a week ago. I felt like crap through the weekend, but I never had a fever or shortness of breath so I guess I was fine. It's perfectly normal to sleep for hours on end. Yesterday, I finally got color back, and today, I finally feel relief from congestion. A tickle remains in my throat and my ears feel full, but I can breathe. Thank goodness.

I'm a week shy of a month wearing the appliance. I'm still not a fan, but I guess I've acclimated to it. I can eat more foods, but my diet is very heavy on carbs. I really miss greens. I still plan my meals around brushings. So, snacking is definitely a thing of the past. You want to lose weight? Start brushing & flossing after everything you chew. You'll quickly find what a nuisance it is. Between brushing and being sick, I don't think my lips will ever be soft again, but I'm continuously applying chapstick to keep the cracks from bleeding. On day 17, I noticed the first visible change, a space began to form between my two front teeth. I suppose that means it's working. 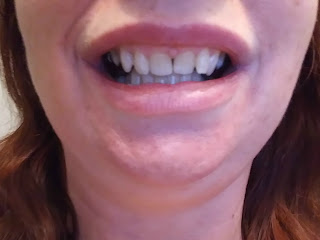