A Day at the Park

My sister moved her family to Las Vegas last July. It seems they are beginning to settle in, Amy started working a couple weeks ago after taking time off to care for Addison and Alexis. Jeff is gaining new responsibilities at his job, their blood is thinning (it is wild when 70 becomes "cool") and Nick is doing better in school. It seems the change to a year-round school took a bit of an adjustment. Initially, Amy was missing rainy days, but we've had an abundance of them this year thanks to El Nino. So, she's really only been longing for grass, water and trees.
Mother's Day was the perfect opportunity for us to make a trip to Floyd Lamb State Park at Tule Springs. I'm a little embarrassed to say I've never been. Even after 13 years here in the desert, there are still plenty of firsts yet to discover. It's about a 45-minute drive from our place so we all piled in the Suburban and took a cruise. We arrived about two o'clock so the park was fairly crowded. We brought blankets, fishing poles and a cooler loaded with beverages. We first settled in near one of the smaller ponds just passed the entrance, but it was pretty chaotic. There was a lot poop (fowl & dog) on the ground and we had a run in with mouse that was originally thought to be a snake. Amy doesn't dig snakes and I have issue with mice so we were both uneasy.
As luck would have it, a friend texted Frank, he also happened to be at Tule Springs. He was with his family fishing on the big pond. Fortunately, there was space nearby and he didn't mind us crashing his party. We relocated and found the new spot much more to our liking. It was near the petting zoo too. As an added bonus, the kids were able to get in for free right before closing. We invited more friends to join us, and by the end of the day we had a large group of twenty. The park itself was smaller than Amy had imagined, but it did in fact deliver on water, grass, and trees. It was a beautiful afternoon and a good time was had by all. 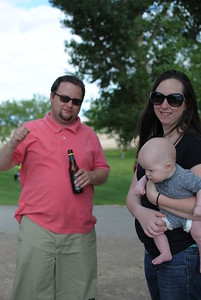 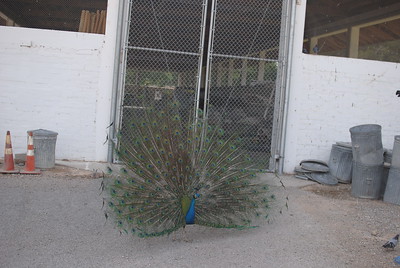 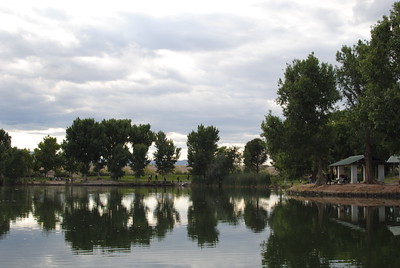