Another item to note about Ecuador is that all car alarms sound the same and they are set off randomly at all times of day and night. After a few days, the sound begins to ring in your ears. No one pays any attention to them, except us at four o'clock in the morning. We both woke when we heard the alarm blaring my initial reaction was to bolt for a volcano evacuation, but when we looked outside we realized it was our rental. We grabbed the keys and turned it off. Neither of us spotted any signs of foul play, so we went back to bed. Every hour, on the hour, it went off again... and again. Once the sun came up Frank went out to check it out. He suspected the battery might have been low because I had forgotten to unplug the cord for the GPS.
After breakfast, we went up the mountain opposite the hotel for a better look at the Tungurahua Volcano. We climbed high up above Banos, but we never left the clouds, and never got a clear look at the volcano, but the view was stunning. We drove back into town and toured the zoo. We had a great time there, I definitely recommend it. Views there, on the river bank, were also lovely.

Gas prices were pretty much the same all over Ecuador. I wish we had these prices back home. I forgot was it was like to fill a tank for $15. Like Mexico, attendants pump the gas and they will have you on your way in a hurry, "llenar por favor."

We had lunch at Le Petit Restaurante, Frank was intrigued by the "pommes y mayonesa" it ended up being potato salad. We also ordered the cheese fondue, the highlight for me was the beautiful tomato salad, but it also had bread, mushrooms, potatoes and broccoli for dipping. By the way, the tomatoes in Ecuador were simply the best.

It began to rain so we went back to the hotel for a siesta. After relaxing a bit, we started to research the Tunguarahua Volcano. We viewed photos of it erupting and looked at on Google Earth. We were pretty facinated by it. Then, there was a knock at the door, it was Carla, Ivan's daughter, we had arranged for her to handle our laundry at breakfast. I misunderstood how much it would be because it is figured by weight (kilo), still it was well worth it to get all of our jeans, hoodies, etc washed. There was no way, I could do all of it by hand and it was better than wasting precious time at the laundry mat. We were near the end of our exchange, and she tells us, "Not to alarm you, but the volcano is erupting." Huh? What! "You can view it in the garden." I thank her, and I run to the window to confirm. Sure, enough, ash is spewing from the volcano! We quickly dress and run downstairs.

The earthquake in Chile must have woke the Tungurahua volcano (April 4, 2014). Photographing a live volcano has been on my bucket list. It was an incredible sight to see. The volcano was thought to be inactive until 1999 when it began to spew hot lava, it stayed fairly quiet until 2006 when it violently erupted in July and August, that year. Six years later, it began to rumble again and it's erupted several times since, most recently in February, 2014. Well, that is until our visit in April. Activity continued through the month finally settling down April 24, 2014.
We snapped photo after photo, mouth gaping wide, with a slight nervousness since we didn't understand the severity of it. Ivan and his family, looked on and took photos so we figured we were safe. We felt pretty confident when they didn't bolt after the emergency broadcasting message came on the radio (though, we had no understanding of what was said). Night fell, it felt particularly dark with the ash canopy above. So, we decided that we'd walk into town and grab some dinner. We attempted to seek out a Mexican restaurant, A Lo Mero Mero. It's supposed to be the best place for Mexican in the whole country, only we couldn't find it. Surprise, surprise. We walked a full block in every direction from Eloy Alfaro y Oriente. It was Friday night so it's doubtful it was closed. We ended up at Swiss Bistro since I recalled seeing it earlier in the day the front of the restaurant is painted in cow print so it's hard to miss (thank goodness).
We sat upstairs on the patio. We enjoyed a bottle of wine, we had strognoff and chicken cordon blue for entrees and split carrot cake for dessert. It doesn't look like much in the dim light, but it was a great meal. The potato pancakes that come with nearly every dish are fantastic! After dinner, we picked up Pilsener and sat in the garden. We recapped the trip thus far, and were so thankful for such an awesome adventure. Ivan joined us and we chatted for hours. We were very inquisitive about living at the foot of an active volcano. There is no insurance. If you lose your home or business, it's just gone. You rebuild or sell the land. It is valuable since the volcanic soil is ideal for farming. I have great respect for him, and his simple life as he put it. He and his family run a great hotel (and soon to be spa).
We woke bright and early to hit the road for Quito via the Avenue of Volcanos. Little did we know that the Tungurahua was lively overnight. While we slept, there was a Strombolian Eruption. We were none the wiser. 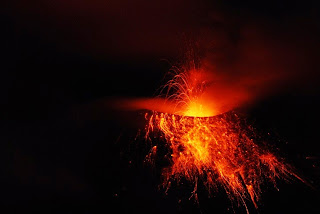 [photo: volcanodiscovery.com]
Posted by Kellee at 6:00 AM