Was January not the longest month in history?! I've never so happy to welcome February. It shouldn't have been bad. We traveled each and every weekend; making every attempt to dodge the cold. Unfortunately, it follows us everywhere we go.

Laughlin seemed like a good way to kick off the 2020 travels. We had a nice time, but brrr! I don't think we've ever felt it so cold. Thankfully, the machines were warmer. I was able to break even after a long run playing video poker. 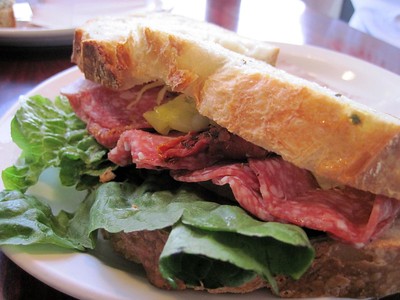 The following weekend we tried our luck in San Diego. It was sunny, but cool. We ran across the border chasing the sun, but winter was there too. At least, tacos make everything better. We also snuck in one last visit to Con Pane Bakery. When, we were noshing on the best damn sandwiches (Italian on Rosemary and PB&J) and cinnamon bun known to man we had no idea it would be the last. They closed permanently two days later. The news was devastating! I'm so glad we got one last taste.

The third weekend of January, we were back in Mexico. This time we drove down to San Felipe, we met Frank's family in El Centro. They flew in from Chicago, and would stay at his uncle's house in El Dorado Ranch. We rented an Airbnb nearby. We stopped for lunch in Mexicali on the way. We've been told the Chinese food is amazing. Who would have thought that, but it's true. It was fantastic. I love the twist and fusions too like limes on the table; avocado or chorizo in the fried rice. The flavors were spot on, but somehow, brighter, with farm fresh produce. It was a delight, and a must stop on all future trips.

We had nice visit with his mom, Dennis, aunt and uncle. We grabbed bites at all our favorites, we discovered, Restaurant Toro; a new (to us) diner with killer breakfast and revisited the Valle de Gigantes. It's too beautiful not to repeat and it was neat to show Dennis. Living in KY, he's not seen anything quite like it.

The next weekend we traveled to Austin. Frontier was offering dirt cheap fares we could not refuse. When the drinks on board cost more than the flight itself how can one refuse? Plus, BBQ. I mean there is no arm twisting here. Better yet, I snagged my favorite hotel - the Fairmont - on Hotwire. Sometimes the stars just align. We were also able to meet up friends from Chicago and grab a bite with Frank's coworker born and raised in Austin. We gorged ourselves silly on brisket, links and ribs. Smoked turkey and Frito Pie can be included in the lot. No matter how often we visit I am still stunned by the sheer number of BBQ joints and shocked by how many are outstanding. We are always on a quest to try them all.

This time a dent was made by trying Terry Black's and La Valentina. We revisited old favorites like Rudy's, Cooper's and Stile Switch. And to further prove that kismet exists and we are meant to be happy, our favorite whiskey bar in Los Angeles is now open is Austin too. But wait for it... Seven Grand is connected to a Mezcaleria... by a cigar friendly patio. It could not have been more perfect. Although, we did kick a dead rat on the way back so do not be mislead I am not able paint a complete picture of perfection. Curious, though, is that bad luck or good luck since it's the year of the rat? I guess we'll see how the year pans out. For now, I'll default to my belief that there is an ebb and flow to all things. The universe, included. To further prove the notion, winter followed us to Texas too. Pity was taken on us on our last day. The sun shined and offered hope that warmer days are ahead. I soaked up every last drop!

January concluded with a trip to the south. We thought we'd be welcomed with sunshine and warmer temperatures than home but the joke was on us. A cold front met us in New Orleans and hung around for the entire Superbowl weekend in both MS and AL. I mean we experienced cooler than normal temps in three states; only to return home to a cold blast. It dropped 30 degrees in 24 hours. Dust off the hot hands. Winter isn't over yet. 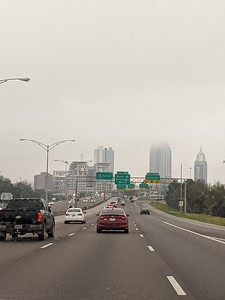 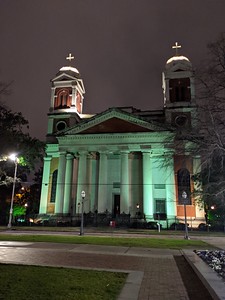 Posted by Kellee at 4:00 AM No comments:

Once in a Lifetime

I didn't get the rest I so desperately craved. My slumber was disturbed by a 2AM fire alarm. There was no announcement stating it was only a drill. I quickly dressed, grabbed my passport and met the other guests in the lobby. Thankfully, it was a false alarm. Apparently, it happens fairly regularly too because guests try to sneak a smoke in their room - opening the window isn't enough to stop the alarm. I felt they should have opened the honesty bar to us to quell the adrenaline. There was zero chance I was falling back to sleep. I kept routine and planned my day.

Since it was Sunday, it only seemed natural to go to church. First stop was Notre Dame. It's a shame about the fire. It maintains my record of a major attraction undergoing repairs. At least the exterior wasn't shrouded in facade or scaffolding. I hear Notre Dame had more tourists than the Eiffel Tower which is pretty remarkable.   Next, I walked over to Saint Chappell. It might not be as famous but it is still quite beautiful. I purchased a skip the line pass, but it was totally unnecessary. It was a cloudy morning on my visit but the stained glass was still stunning. 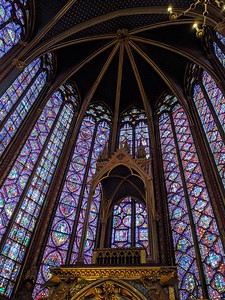 I also purchased a skip the line pass for the Arc de Triomphe. Google showed the route only taking 15 minutes by train. However, little did I know that metro and RER closures continued throughout the city due to the yellow vest anniversary. It took two hours to get to the Arc de Triomphe only to find it closed.

Police were searching anyone with a back pack. Traffic down Champs-Élysées was halted due to random searches and even by foot I was redirected.

I had time to kill before my Eiffel Tower skip the line tour with guide. So, I opened up the Fork app in search of lunch. I was led to La Marée. The reviews were solid and I received a discount. I ordered the bouillabaisse I was all about trying as many classic French dishes as possible. It was good, not great. Cioppino will always be closer to my heart. I finished the meal with the largest dessert I've ever seen. I made a dent but finishing it was out of the question. 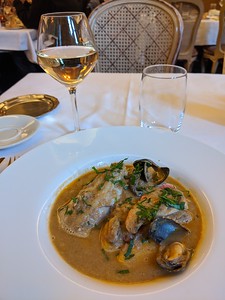 I walked to the Eiffel Tower Tour office a bit early in hopes that they'd accommodate me. They tried to upsell me to a summit visit a bit later than my scheduled tour, it was only 10€ more so there was value to be had, but I refused due to other plans. I was told to return closer to my 4:15PM reservation.

I went to a nearby bistro for a glass of wine to pass the time. It fit the bill perfectly. I was able to join the group departing at 4pm. The guide shared many details that I had already known. However, she also pointed out the Louis Vuitton Fondation. Which is a museum designed by one of my favorite architects, Frank Gehry. It was immediately added to my must visit list. After the tour, the guide set us free to explore. 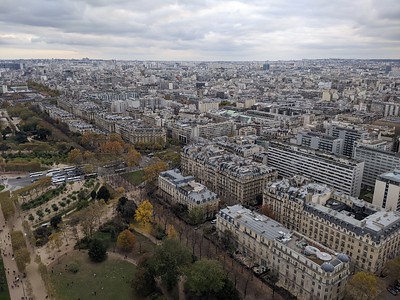 I hung out on the tower til sunset in case mother nature decided to put on an impressive display. It never dazzled so I bailed to see the hourly light show from Tracadero Park. I ended up stopping short, at the Siene River; the view was spot on.

Plus, I figured Uber would be easy to catch from the carousel. I had to get to La Maroquinerie for a Stick Figure concert and knowing the disaster train service had been all weekend, I wanted to avoid it altogether.

After securing an Uber I was on my way to the venue. I sent my ride to Frank, I was solo, my driver spoke no English. Since I was stranded and exposed to tear gas the day before; If I had learned anything, it was that havoc was possible at any turn. Fortunately, I arrived without incident despite a few road closures and even more close calls. A reminder I never want to drive in Paris.

I joined the line outside La Maroquinerie. Frank questioned if I was in the right place. I doubted it myself until I saw the sign welcoming Stick Figure. Doors opened and we had free reign. Had I not been solo I could have secured a spot front and center. My thirst got the best of me and I went in search of a water and beer. There was no coat check so I was pleased I brought my packable jacket especially since it was already warm before bodies filled the space. I was able to roll it up and tie it onto my purse so I would not lose it.

The venue is described as a sweatbox, it did not take long to learn why. I also quickly discovered why perfume is so popular in France... Though deodorant should be. It was not the ideal situation for those of us that are vertically challenged. That said, it was so worth while. Stench and all. No one in the place spoke English. Then, Stick Figure took the stage and the sold out joint sang word for word in unison, with more accuracy and enthusiasm I have ever encountered in the states. 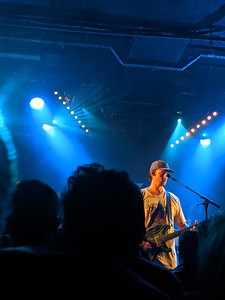 Beforehand, I was fortunate to meet Stick Family. The moniker given to fans on Facebook. It was the only English I heard before Stick took the stage. It was incredibly cool to meet people from all over that we brought together by the love of music. Once in a Lifetime. Actually... I hope not! Truly, the experience, only encouraged me to travel outside the US to see my favorite bands. Also, don't hesitate to attend a show solo. Sure, there is no one to hold your spot, but it definitely has its perks too. I'd do it again in a heartbeat.