Another One Bites the Dust

Earthquakes, hurricanes, fires and floods, and most recently bitter cold. It is safe to say 2017 was rough! It was tough on Las Vegas with the 1 October shooting. Losing my dad so suddenly was hard on me. I'm sure I'm not alone in wishing good riddance to 2017. Thankfully, I had just enough grit to see me through.

Even in the most shitastic years there are plenty of beautiful moments and treasured memories. I try to focus on the good, rather than dwell on the heart ache. Even if challenges outweighed my triumphs I'm extremely fortunate to have my home, my health and my core. Frank, Mike and Amy and the kids make me whole. To see them thrive and grow make all the difference in my world.

After 20 years together Frank and I found something new - Hockey. Watching the Vegas Golden Knights has been a wild ride. The city was ready for a professional sport and they came when the community needed it most. We've rallied and united. The games are electric. It's been great fun.

Dining has taken back seat, we're cooking more at home. But we still visited our favorites (Cleo, Joe's and Mariscos Playa Escondido) and found some new gems like Meraki and El Tamalucas.

In 2017 we got started with home improvements by painting and adding shutters. There will be more to come in 2018.

More importantly, we'll be improving ourselves.

The past few years have really taken a toll on me. I'm hopeful 2018 will be magical. If nothing else more kind. Unlike years past, I've chosen a word to kick off the new year because I know there are big changes on the horizon. Resilience. With any luck it will serve me well, and provide encouragement and inspiration as I navigate these 365 days of 2018.

And now, the notable of 2017 (local eats were lacking this year; so they've been excluded):

Do More - That feeds my soul

Best Eats - San Francisco it's such a melting pot; the best of every cuisine. 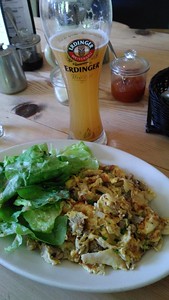 Best Movie - Slim pickings. Pretty sure I saw three and not one wowed me.