Since the loss of my mom just shy of two years ago, I have learned that losing a parent is a wound that never heals. Still raw from that void in our hearts, we now know that the most painful goodbyes are those that are unexplained. Dad, you will be missed more than you could know. I love you. I'm grateful for our time shared and memories made, and I will hold those over the past couple years most dear.

I was really excited to try this Sunbasket meal. To cut back on carbs it called for Celery Root. I was intrigued. First of all, I've never even tried celery root let alone prepared it. Second, I'm always looking for new ways to reduce carbs. While I love them truly. madly. deeply. I simply cannot carb load like I could in my younger years. I try to practice restraint, tasty alternatives help the cause.

Furthermore, this recipe also included a note from Sunbasket, it stated they had to substitute the Italian sausage links for ground sausage per quality control and they provided alternate cooking instructions. Fortunately, Italian sausage is a staple in our house. So, I instead defrosted a couple links from the freezer and opted to use the provided sausage at a later date (which ultimately was used for meat sauce over rigatoni - proving it's hard for me to resist carbs).

I placed the sausages, bell pepper and broccoli onto a sheet pan and roasted them in the oven until the sausage was cooked through and the veggies were tender (and later tossed them with sherry vinegar). Meanwhile, I prepared the celery root mash. It was easier to work with than I imagined, had I seen it in the grocery store I'd be intimidated. I trimmed the skin and cut the flesh into quarters and then 1/4" thick slices. I heated butter in a sauce pan and then added thinly sliced shallots and the sliced celery root, cooking it until tender. Once softened, I added vegetable broth and brought it to a boil, and then let it simmer until I was able to use the masher. It came together very much like mashed potatoes. The depth and richness was a pleasant surprise. Frank and I both liked the mash and combined with the peppers and broccoli was a fun twist on the sausage and peppers we typically enjoy. I could make this again and again, I don't think I'd hear any complaints.

Amy and I threw, our brother Mike, a surprise 30th birthday party with a Breaking Bad theme. The cake was killer, it was a definite center piece. It came out even better than we expected, complete with Los Pollos Hermanos chickens, a bacon 30, Heisenberg, and a cartoon Jesse and Walt in hazmat suits, and, of course, blue meth. The theme was carried throughout our menu, we served roof pizza, Los Pollos Hermanos Chicken Wings, Heisenbergers (cheeseburger sliders), madrigal sauces, awkward guacamole, funyuns and blue rock candy. You could wash it down with Shraderbrau or blue barrel juice for the kids. 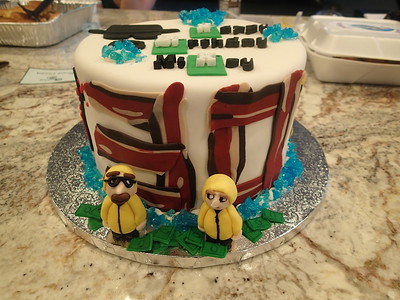 Decorations were a bit sparse, we were smack dab in the middle of our painting project. Time already wasn't on my side, I was further delayed when the guest of honor showed up unannounced about two hours before his party. I scrambled to keep him out of the fridge and party details out of sight while I came up with an excuse to send him to my sisters until the big reveal. We had nods to the show scattered inside and out. In hindsight, I could've done a better job capturing the details. However, we pulled off the surprise and had a fun celebration. I can't ask for better than that.