A short drive from the coastal town of San Felipe lies the Valley of the Giants. Which is home to the cardón cacti, the tallest growing cactus in the world. Often mistaken as saguaros, these cacti have a life span of up to 300 years and can grown as tall as 70 feet.

From San Felipe, you head south on highway 5 until you reach Punta Estrella near KM 14 you'll spot the turnoff for the Valle de los Gigantes on the right. The cost is $10 US per car to enter the park.

If visiting without a 4x4 vehicle much of the forest will be inaccessible. Though, it's still well worth the trip to see these giants. Fortunately, we were equipped with 4WD and we had full access. The cacti are mighty impressive and the ocotillo are also the largest I've seen. Palo verde also dot the beautiful desert landscape. 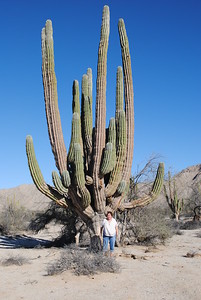 Posted by Kellee at 5:00 AM No comments:

Rollin in...
Can’t seem to make it though the sets are rollin’ in... - Rollin, Tomorrow Bad Seeds

During our stay in San Felipe, we felt right at home in the beach bungalow we rented from Airbnb at Victors RV. We were steps from the sea and walking distance to the Malecon which is dotted with shops and restaurants. We visited during low season so the area was pretty desolate. Only a few restaurants were open for breakfast or lunch. Far more were open for dinner.

Though, you could tell much of the businesses were shuttered for sometime, including the Rockadile. I assume this was due to the season, but perhaps the economy is to blame. Multiple 7 Elevens and an Auto Zone looked liked they were newly opened so I'm betting it is lively during peak season and the Baja 250 & San Felipe 250 races. 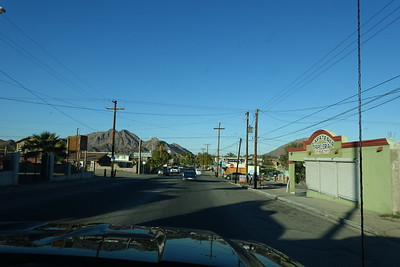 I booked the bungalow for its proximity to the water and it did not disappoint - The view was stellar. The sea breeze was a bit chilly, but the warm sun felt nice. That is until it set, anyway; the nights were down right cold. The unit is equipped with A/C but no heat. While it was pretty basic overall, I liked it. It was cozy and comfortable. Even with the duct tape.

You might have noticed the sea level the photos above. San Felipe is really quite special because it experiences a large tidal bore, one of the world's largest; water can recede as much as 2 km during low tide. We didn't encounter that much difference, but the water did recede about 3 football fields in front of the bungalow. I was completely fascinated. Clamming and metal detecting is quite common during low tide. This was when we saw the most people on the beach - 6 counting us. The sunrise was amazing! We also enjoyed a long early morning walk on the beach down to where the shore meets the wall to the neighboring marina. And then, at low tide we walked out as far as we could. It was really wild. 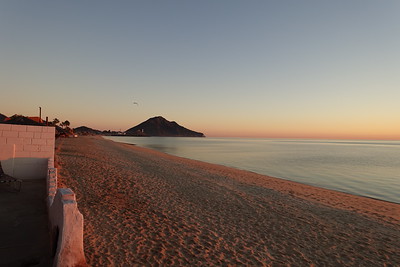 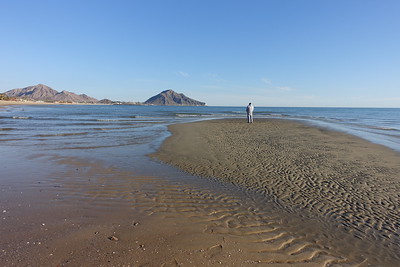 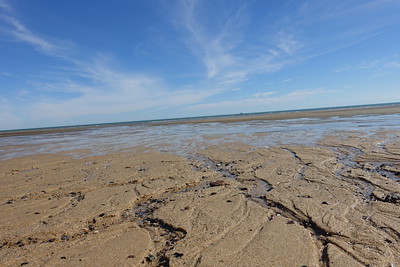 We only had a few meals while in San Felipe. Breakfast and lunch options were pretty slim, on the first day Frank and I had lunch at Baja Mar. We ordered fish tacos, grilled and fried. They were served in a build your own style. The grilled were better than fried here, the breading slipped off the fish and lacked the crunch I expect. The next morning, we had breakfast at a little place specializing in Cuban and Mexican, it's on the second floor across from the bank. I failed to catch the name. Breakfast was great, we had chilaquiles and huevos rancheros. It was cheap too, about $9 US.

As luck would have it, both of our dinners were at La Vaquita. Previously, there was only one location near the Malecon. It is Frank's aunt & uncle's favorite. They recently opened a second location near El Dorado Ranch in a space previously occupied by another restaurant. It was quite the surprise to find the same menu. Then, we got the scoop from the waiter. Taco Factory, Baja Mar and La Vaquita are all owned by the same family, the mother (if I'm not mistaken) passed away last year. Now, the children, a brother and sister have taken over operations and they opened the second La Vaquita. We preferred the original location. It had better ambiance, service and they accepted credit card. The food was a bit better there too, although, the new spot had better presentation. My favorite part of both meals was the yellow peppers stuffed with shrimp. Yum.

We were pleasantly surprised to find two Thrifty Ice Cream shops (El Dorado & Malecon). We're big fans and couldn't resist a stop after dinner one night. A single scoop of pistachio and strawberry hit the spot, even if I couldn't shake the chills.

Posted by Kellee at 8:53 AM No comments:

Take Me Down to Mexico

Frank and I took a quick jaunt south of the border. We left on Sunday, we weren't sure when Frank would get out of work - Playoff Games - so I booked a night at the Quality Inn El Centro on Hotwire. We lucked out a bit and hit the road earlier than expected and no traffic was to be found. We clocked in at four hours. Our first choice for dinner was not open, but thankfully, we found Jalisco Grill just before it closed for the evening. The combo plate and chimichanga hit the spot and the frosty Tecate was refreshing. Back at the hotel, we finished binging Sneaky Pete. The hotel was worn, but clean. I am not sure why it warranted a 'Love it' from Hotwire, but it met our needs.

With a full tank (Mexico stopped subsidizing their gas prices at the first of the year), we made one stop at Starbucks before we headed for the border. Thick smog covered the sky and it didn't let up until we were well past Mexicali. The border crossing into Mexico was undergoing construction. There was no waiting about 8am and we were able to pass without saying a word or showing any documentation. The highway to San Felipe is in great condition (way better than those in California), it's easy to navigate and the views are pretty scenic. After 2.5 hours we spotted the Rockadile which marks the turn off to El Dorado Ranch.

Frank's uncle and aunt have a house and a couple solar lots in that community. They escape the Chicago winter every year in January. This trip, they invited Frank's mom to join them. They also invited us down. We were welcome to stay at their place, but we opted to rent a beach bunglalow in Victors RV via Airbnb. If I can afford beachfront, I'll choose it every time. But before we checked in, we met up with them for a brief tour. They have a lovely two bed two bath house that sits between the Sea of Cortez and the Mountains. As an added bonus, there is a rooftop deck that offers panoramic views. The community has a couple pools, clubhouse with activities, private beach access and a couple of restaurants. There is a small market and gas station nearby so the set up is very convenient. It's easy to see why they enjoy it. The house is available for rent the rest of the year. 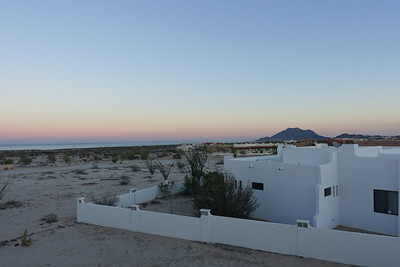 Solar lots in El Dorado Ranch are raw land without electricity. Many park RVs on these lots. Though there are a few homes with solar and/or wind.

The pools near their place are newer. The other is in La Ventana del Mar which is closer to the beach. There are luxury condos on that side surrounding the golf course that are modern day ruins. When the real estate market in the states went bust, San Felipe was severely impacted. Houses, condos, hotels all remain unfinished. Folks had big dreams, but now only the skeletons remain. But I digress, the pool area is large with a lap pool, lounge pool and large hot tub.

Posted by Kellee at 3:43 PM No comments: