Two years ago, we had the best time in Portland. I was eager to return. Frank's been back once or twice, but it never worked out for me to join him. Well, not until recently that is. Spirit ran a deal, like they often do, and I had just enough vacation time left so it was easy to pull the trigger for long weekend getaway. I was so looking forward to the trip! Of course, I started feeling sick a couple days before we were set to leave. All you need is plans, and germs inevitably strike. Nevertheless, I rested and was determined to be well for the trip. Unfortunately, the sickness had other plans. Still, I had every intention of making the most of it.

We flew out on Saturday morning, our flight was fantastic. It was on time, it wasn't full so we were able to move around a bit and the flight attendants were friendly and one in particular was a real comedian. After arriving in Portland, we sought out Alamo to pick up our rental car. I had booked it a few days prior for a hot rate on Hotwire. It would seem every other traveler had done the same, because we found the shuttle bus line about 40 people deep. That shuttle filled and we still had enough left behind to fill another bus. We were met with another long line at the rental counter, thankfully, the kiosk lines moved more quickly. We were able to retrieve our reservation that way, which saved quite a bit of time. From that point, it was a breeze and we were soon on our way, we had our pick from a row of vehicles and Frank chose a GMC Arcadia.

We were starved, I opened up my bookmarks on Yelp and saw that Tasty N Sons was nearest to us. I loaded up directions and we were off, or so we thought; instead, we found ourselves in a traffic jam. It was rather unexpected for a Saturday afternoon. At least, we caught a break by finding an open parking spot right outside the restaurant. There was no open seating so we left to wait yet again. We were seated just before brunch ended. We chose a bunch of small plates to share. Each was OK, but every dish was flawed in one way or another. It was rather disappointing.

Our home for the next few nights was a studio near Ladd's Addition. Yes, I booked an Airbnb based on its proximity to Apex Bar. We loved it so much last time, I knew we'd be spending more time there. After securing the reservation I was thrilled to learn not only was it close, but it was actually across the street. Kismet, baby! It was a kickass set up, it had everything we could possibly need. And the location? Superb! It was the perfect home base for our adventures. 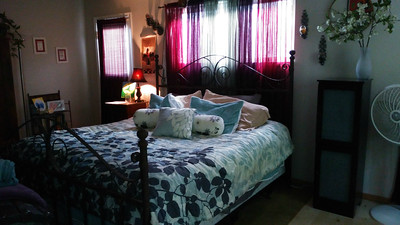 We sort of struck out at Apex, though. The ciders I tried were good, but nothing exceptional. Frank wasn't digging the beers he chose either. So, we left for the neighboring Beer Mongers. Which we also loved last visit. There, I found a sour cider that was special and Frank took a liking to a Weiss beer.

Last trip, we found Tasty N Alder right before leaving for the airport, and it was fantastic. They had the best fish tacos and I've been dreaming of them since. So, when we started to feel a bit hungry we drove downtown for a fix. We knew there'd by a wait, we checked in and wandered around the block to pass the time. We sat at the counter near the kitchen, it was cool watching them work. We had a great charcuterie board, and chose a handful of other dishes, but nothing was particularly good. The fish tacos? Well, they were pretty gross. No joke. Talk about a bummer. 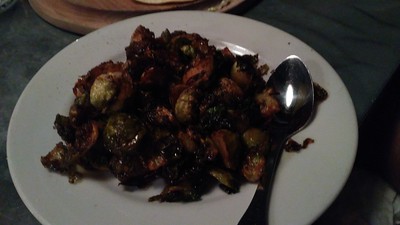 I had been pumping myself full of cold medicine all day to keep afloat, but I was waning fast. Frank was still hungry and determined to find some good eats. Veritable Quandry was Frank's favorite restaurant from previous visits so I looked that up, but it had closed. I threw in the towel. Frank took over and found an Argentine restaurant that sounded promising. Thankfully, Lechon was quite good. We had sweet corn and brisket empanadas and a glazed pork cheeks.

As much as I wanted to stay out and play. My body wouldn't have it. I was wiped out and pretty miserable. I drugged myself with cough syrup and went straight to bed. Unfortunately, neither Frank or I caught more than a few winks. I coughed. all. night. long.

We got an early start Sunday morning, we had plans to meet friends in Eugene at 11 o'clock. We grabbed breakfast at Pine State Biscuits before we hit the road. Frank loved their biscuits and gravy. The biscuits were pretty amazing. I tried the hashbrowns loaded with cheese, onions, ham and mushrooms. It was quite good, all except for the ham. It was oddly dry and hard. 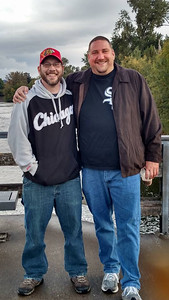 The drive to Eugene was easy. We found a Buffalo Wild Wings to watch football. So, all was right in the world. Our friends met us there. We've been friends with Bill since high school and a few years ago he moved from Chicago to Bandon, OR to be with Anne. It was fun to catch up, after the games we had a bite at a bar near Putters. Then, we made a stop at Human Bean for a granita (just for you, mom) & espresso beans. We also checked out the Willamette River, and later, tagged along with them while they shopped at Costco. We've never been before. Bears! Oh my!

We had a late dinner at Pok Pok. Even close to closing there was still a wait for a table. We ordered the famous wings, eggplant salad, boar collar meat. ribs and a side of sticky rice. The marinade for the collar meat was great, but everything else fell a bit short. It seemed to be the theme for all of our favorites from last time. 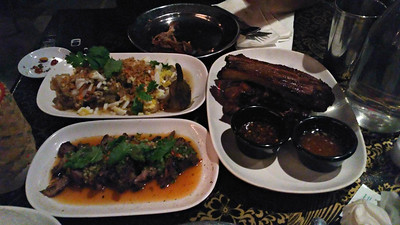 Afterwards, Frank went to Apex for a beer and cigar. I was too tired to join him. I took a larger dose of cough syrup and had a fairly restful night. 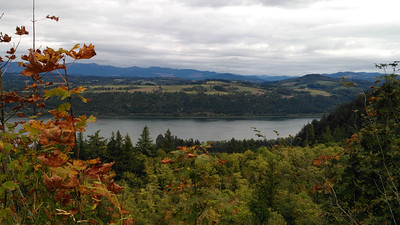 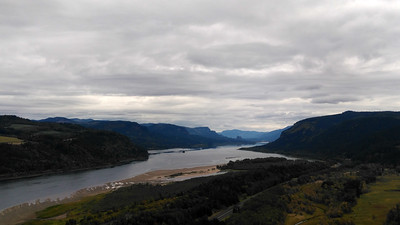 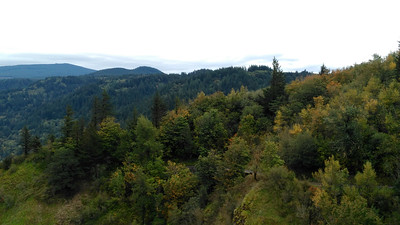 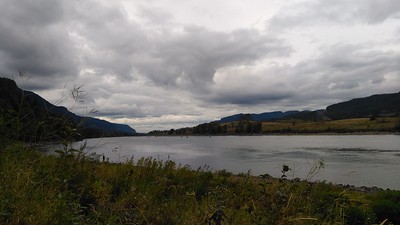 It had been pretty rainy and cool, thus far, and the weather never improved. Each day, I'd hope to wake refreshed and feeling better, but relief never came. I had wanted to hike to Elowah Falls, but I just didn't have it in me. Instead, we drive the scenic byway and stopped at Lotourelle Falls since it was right off the roadside. The sights all along the Columbia River Gorge are stunning so we still enjoyed ourselves. I suggested we check out Thunder Island Brewery before heading back, and the view was lovely, but the beers were duds. I vowed to pick nothing else for the rest of the trip.

For lunch, Frank chose Guero's Tortas. Which were very good, the food truck trailer park also had a good gyro spot and some tasty draft beers. I was already wiped out. So, we napped back at the studio as another storm passed thru. The dreariness and cool air definitely made for ideal sleeping conditions. We watched Monday Night Football at Beer Mongers. Later, Frank chose Stammtisch for dinner, which was a gem. The beer was excellent, we also enjoyed potato pancakes, spatzle, sausages and pasta with leek fondue and brussel sprouts. 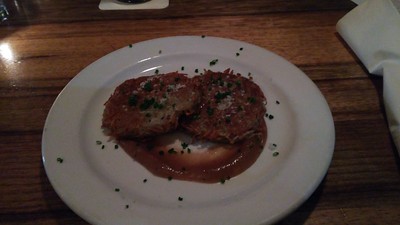 Again, I retired early. Hopeful I'd be well enough to enjoy our final day, but no such luck I felt worse than ever. It didn't stop us from one last breakfast at Pine State Biscuits.

After, Frank took me to Pittock Mansion. On a clear day you can see five volcanoes, this day the clouds hung low and only downtown could be seen. 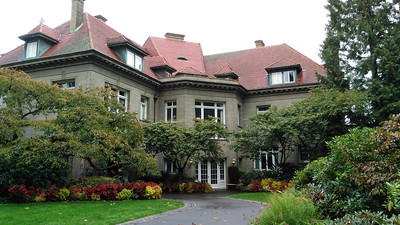 We were in the mood for a snack so we sought out Gastro Mania for bacon wrapped grape leaves. They were mighty tasty! Frank enjoyed a gyro, as well.

Then, we wrapped up our trip at the Waterfront Park. I made a pitstop at Bean & Tree for an Oregonian Coffee since I was such a fan last time. You guessed it? It wasn't as good as I remembered.

We sat under a tree to keep dry and watched rainbows form over the Hawthorne bridge to pass the time. Before we knew it, it was time to return the rental and fly home from PDX. Despite the disappointing experiences, endless drizzle & chills, and even, having felt so crummy; we still managed to have a good time.