That first night went way better than expected. I was in a splint for the first two weeks to allow for swelling, I kept my leg propped up on four pillows to keep it properly elevated. I took the pain meds to stay ahead of the pain and two per dose were suggested, but I opted for one. I really didn't think I needed them, and I certainly didn't want them, but I followed doctor's orders. I figured they knew better than me. I was confused by how long the nerve block would last, I heard different answers - as little as a few hours and as long as 18-20. I was good until sometime the next day. Then, it was clear why they suggest two pills for each dose for the first 72 hours. I took two every four hours. There was no losing track of time. My body was very alert, it knew when the meds were due.
The next few days were a blur. It was an extremely uncomfortable time. My skin remained dry and itchy. I developed a rash, anti-biotics or pain meds? I'm not sure, but it did clear up when I weened myself of the Percocet. That's likely to blame. They say general anesthesia makes you hyper-emotional, maybe it does, but I also was grieving and overwhelmed with the duties that come with the death of a parent. I was a mess. The pain was strong. I depended on the pain meds more than I would've liked. They caused constipation. Anytime my foot wasn't elevated was extremely uncomfortable because the throbbing would increase in intensity. All I could do was lay in bed, I'd take deep breaths and repeat "This is only temporary" it's been my mantra for weeks now.
I had great expectations of watching Netflix, reading, and writing. But I couldn't focus, my days and nights were spent trying to find a comfortable position, fighting for sleep, and re-watching all the episodes of Sex & The City. The highlight of my days were visits from Nick and Addison. Frank returned from his trip. I couldn't help but feel envious of his adventure. I'd give anything to escape my thoughts or the four walls that surrounded my bed. I was so stir crazy and anxious the first few days, I had no idea how I would survive two weeks off work, and stuck in bed. My outings were limited to errands dealing with my mom's death. I enjoyed the warmth of sunshine (even if the sun felt too bright) and the fresh air the outings provided. Even if it was a struggle & painful to leave the confines of my bed.
I couldn't help but reflect on the last year, and my heart broke for my mom. I was only recovering from ankle surgery and on pain pills for 10 days. She was battling cancer, while fighting to breathe... she had no choice but to depend on stronger and stronger medicines for pain. And all the awful side effects that come as a result. I suffered only a month of the insomnia she complained of for year, and I was going mad. I did all I could for her, I did my best, but now that I found myself in a similar hell. I wished I had been more patient, more compassionate. That's all I could think at all hours while I laid awake, praying for sleep, in the very bed she'd lay during her stays at my house.
Coming off the pain meds seemed to improve my mood, and by then the routine became familiar. I still felt isolated and depressed, but my spirits were lifting. I was eager for the next step in my recovery.
Posted by Kellee at 2:34 PM 1 comment:

I often tease that the best thing I make is reservations. I'm not gifted with much culinary talent. I'm better at baking, than cooking. I can follow a recipe, I understand the science behind it. However, I cannot add a little bit of this or that like our grandmothers have been doing for centuries. It must be the control freak that lives deep in me. I do, however, love food. I love that it brings people together, I love the ties to our past... I love dining in restaurants. Whether they are "a hole in the wall" or worthy of Michelin Stars. I find when you get to dine at the latter, there is no need for a special occasion, the meal itself is the celebration.
While Frank's mom was visiting, he arranged a dinner for the three of us at Guy Savoy. I've been eager to dine there since it opened it's doors. Needless to say, it felt a bit like Christmas as we prepared for our tasting. Once we got started, the magic words were spoken "If there are no allergies, do you mind if the chef makes selections for you?" Please! And so our feast began.

We started with a few Amuse-bouche vites: Waffle with olive tapenade, filet mignon burger, and foie-gras toast. Each were bursting with flavor and left us wanting more.

Next was the Colors of Caviar & Breadcart selections: caramelized onion, bacon and baguette. It's always difficult not to get carried away with bread. Limiting myself to three choices showed great restraint. 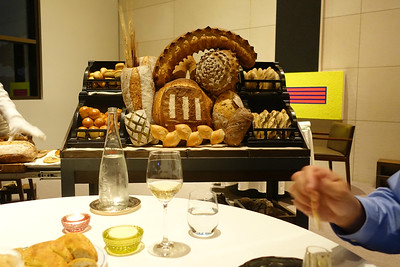 Octopus enhanced with a little magic, followed. It was a thrilling presentation. 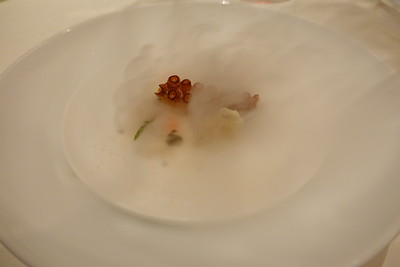 The Seabass with crispy scales was a real treat.

Between courses, the broth for the foie-gras infused before our eyes.

The seared foie-gras, crispy quinioa and verbena infusion was delicious and decadent.

Hands down my favorite dish was the Artichoke Truffle Soup with mushroom brioche and black truffle butter! No cream is used, but you'd never guess that's the case. Smooth and velvety... and glorious truffles. 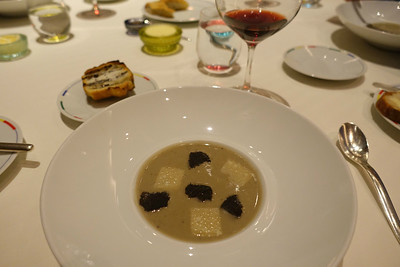 Peanut crusted duck breast, leg confit and beet napoleon was a striking dish. I can never get enough duck confit. Frank is well aware, and shared a bite. 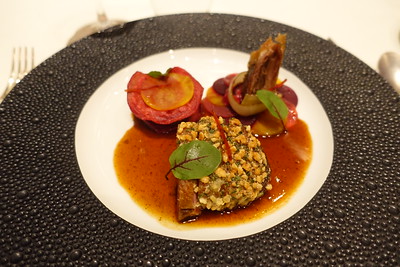 Gears shifted toward dessert with Fig & Tapioca Pearls. I welcomed the delicate sweetness.

The Apple & Quince highlighted everything that is fantastic about fall.

It was the chocolate fondant crunchy praline and chicory cream that spoke to my heart. Simply sublime.

As if that wasn't enough, we were tempted by dozens of offerings from the Dessert Cart: madeline, vanilla bean and cheesecake.

To conclude our dining voyage, a lovely Sorbet to refresh the palette.

It was a fantastic meal, with superb service. It's such a privilege to enjoy a meal such as this. Oh, and who wears slippers to a fancy meal? This girl (damn, unstable ankle).

The Caesars Anthology Collection makes it possible to sample the life of luxury typically reserved for the rich and famous. These suites are among the finest in the city and start at $25,000 per night. They include VIP check in, airport transportation and butler service. We were fortunate to spend one night in the 11,200 square foot Titus Villa. An English garden theme is carried throughout much of the villa, although it also has many Asian influences. There are three luxurious bedrooms, four bathrooms equipped with steam showers and bidets, dining room with mural (butler's quarters), billiard room, media room with silk adorned walls and a 103" 3-D TV. As if that's not enough, you can also relax in the private outdoor garden complete with spa and firepit.
This was too good to be true. We couldn't keep it to ourselves; we had to share the experience with our family and friends. We invited everyone to come during the football game. This was one of the greatest photo opportunities of my life, and would you believe, I forgot my camera? I absolutely did. Thankfully, Amy brought it to me when she came with the kids. By then, Frank and I had taken advantage of room service and had sandwiches in the media room, so excuse the mess. By the way, the massage chairs are heavenly. The tubs were larger than any I've seen before, which should have been great, but they were tricky to get in and out of... #mansionproblems. The shower in the master, though, was divine. It seriously had me considering converting one of the extra rooms in our house to recreate it. This staycation was simply incredible. Exploring every nook and cranny of the villa was the most fun. 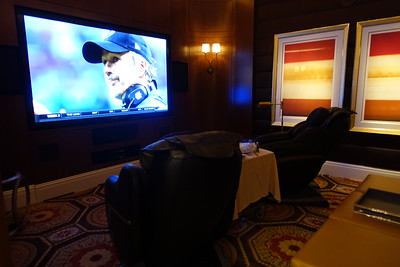 Posted by Kellee at 2:30 PM No comments: