I came across a site that creates a color coded map of where you've traveled in the States. 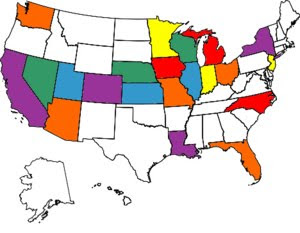 Make your own here.

Neat, huh? I've covered a fair amount, but my goal is to hit them all. As you can see, there are a lot left to experience. Frank and I were talking about taking a road trip in April to see Yosemite and then head up to Oregon and drive down the Pacific Coast Highway. But we scratched that trip. Which also means we're missing the White Sox in Oakland, but I'm not in the least bit bummed.

Because we're going to Italy instead. Yes, Italy! It's been a dream forever. Over a year ago we started a savings account specifically for this trip and we've been socking away money each week. At the beginning of the year, I priced a trip for April. It was going to cost more than what was in savings so the trip was put on the backburner until we could collect more. It turns out, the trip became possible sooner than we ever imagined. I instantly went to work gathering rates, and was pleased to find airfare considerably less than flights I saw in January. Reality hit, "we can do this!" so we quickly secured time off, and today, I made it official. I booked airfare to Venice and we'll head back home from Naples. I'm still researching hotels, I intend to have those booked by the week's end. Then, I can begin on sights and the most fun - FOOD! Hopefully, I'll pick up a fair amount of Italian along the way.

Oh wow...how cool...and sudden! You've got some serious planning to do...way to go!

I did the map and I'm embarrassed how little of it is filled...yikes. I've got some living to do.

You should knock some off the list on your drive out west. Which route are you coming?