"All you need is a dollar and a dream" 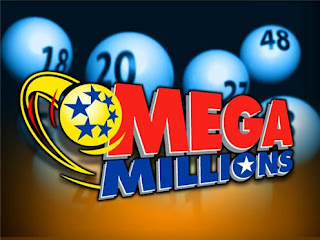 $540 Million. How would it change your life?
The cash option of $389 million is nothing to sneeze at.
Last weekend, we bought tickets for Tuesday's drawing while we were in Phoenix. I think we won a couple bucks. I hope the big pay off comes tonight. I asked my mom to go to Shoshone to buy tickets. It's not far from her, and the waits for the lottery outside Primm are three hours long or more. As long as she doesn't run off with the winnings we'll be good.
I think everyone has been thinking of what they'd do with the Mega Millions winnings. There is no doubt we'd take the lump sum and ultimately live off the interest. We'd set up the family and donate to local charities. I'd love to create our own non-profits. We want to help people with ideas and needs, and connect them with the resources to make those things happen. I'd like to open a restaurant. And I'm sure Frank would see to it that White Castle makes its way west. Even if it meant buying the empire. We'd have a few homes, but at least one would be entirely off the grid. We would travel the world. "Hmmm, I have the taste for crepes. Let's go to Paris!" "I want Chinese. Let's go to Hong Kong!"
I think the first thing I would want to do is go to the airport with passport in hand and ask for the next flight out of the US to some place tropical. Then, I'd call work to say "I quit." While I was relaxing on powdery white beaches I'd work with Frank to come up with the next step.
Posted by Kellee at 9:07 AM 1 comment:

So, for my 1000th post I'm going to share what I did for my 32nd birthday.
In my final hour of being 31, I played Nertz with Frank and Shane. Frank and I have been playing for 15 years and I have never won, until then. I beat him and Shane both. I was so excited I offered a rematch. My luck did not last to 32. It will probably be another 15 years before I win again, but that's ok. I can revel in this victory.
Sunday was a beautiful day in Phoenix. A bit cloudy, but otherwise perfect. The clouds were actually a bonus, I think they aided in protecting me from the sun. Our shaded seats helped too. I believe it's my first Spring Training weekend I didn't get fried by the sun.
We were at the Camelback Ranch to see the White Sox vs. The Giants.
We have healthy dose of new blood this year. No more Ozzie. I was anxious to see how the boys would play under the direction of Ventura. They looked good out there. Even Dunn made it on base. Granted, it was a walk, but he restrained himself from swinging the bat. We won 5-2. It was one of the better Spring Training games we have seen.
After the 5th inning, Frank surprised me with Birthday Greetings on the scoreboard. Having your name in lights, sure makes a girl feel special. After the game, we packed up and headed for home with a stop in Kingman. Tradition is a bite at In-N-Out, but this time we stopped at El Palacio. It's associated with the one in Bullhead City and Casa Serrano in Laughlin. We love those two, but El Palacio in Kingman wasn't up to par. The salsas were still top notch and that's my favorite part anyhow.
Amy and Nicky sung me Happy Birthday over the phone. On Friday, I got a card from them that totally made my day. I send Nicky cards for all the in between holidays like Valentines and Halloween. I always include cash. So, in my birthday card he insisted that Amy include a dollar bill.
When we got home it was rainy and extremely windy. Possibly the worst gusts we've had at the house. They were so bad the blind in our bedroom swayed and rattled from the winds and the window was closed and locked. Once we got settled, we cracked open a beer - my brother surprised me with a six-pack of Victoria and Kellerweis chilling in the fridge, and watched the premiere of Mad Men. It was a great end to a great day.
On Monday, I received a package from my mom with camera goodies which will come in handy for our trip to Italy.
Frank's weightloss challenge ends on April 7, so I've decided to postpone my birthday dinner until April 8. I want to finally try Scarpetta.
I'll leave you with photos from the game. Last week, flew by so quickly I never got here. Better late than never, as they say. Friday we loaded the RZR onto the trailer, and packed up the Avalanche then hit the road to Phoenix, about 5 o'clock. We arrived at, our friend, Shane's house five hours later. Pulling the trailer makes for a long drive. We wanted an early start on Saturday so we got settled and called it night fairly early.
Saturday we were up and out by 7:00. We met a large group at Shane's brother's house, we drove up to Lake Pleasant and rode 26 miles to Crown King, an old gold mining town. The first half of the ride was so dusty I had to keep my eyes closed. We've never needed goggles before, our trails are far more rocky. We are not used to dirt. Fortunately, Shane's sister-in-law lent me a pair and Frank was able to use those. Crown King is a small town with a few conveniences. We stopped for lunch at the Saloon, and I ran over to the general store and bought a pair of goggles. The ride back was so much nicer. Had my eyes not been burning from the ride there it would've been perfect. The trail is great, though, it takes you from the Sonoran desert laced with saguaros over rock gardens and through water crossings and the elevation climb has you in pine forests with snow in no time. On the way back we had a scare, one of the guys in our group was on a quad and took a turn too fast, he lost control and bailed before the quad jumped off the trail into the ravine beside it. When we came around the bend we only saw tires up toward the sky. We quickly parked and raced over. We didn't know he bailed so it was a relief to see him unscathed. We worked quickly to get the quad out and fortunately a RZR came by with a winch. What could've taken hours took a few minutes and we were on our way. Add a winch to the neverending list of handy accessories we could use. We packed up and headed for home, well, Shane's home. I couldn't wait to shower so Frank let me go first. I havent' been so dirty since the Color Run. This time, though, I was covered in dirt, dust and mud. Instead of an array of colors. I cannot begin to express how great it is to explore trails away from home. Arizona is the third state we brought the RZR to ride trails. It reminds me that there are more trails than I have time. And it makes me want to just get out there ride.
Posted by Kellee at 1:28 PM No comments: