My Beef with Delis

Why do most deli's "proudly" serve Boar's Head? I don't understand it. I get that it's better than prepackaged Oscar Meyer or Carl Budding... it's no wonder that I didn't enjoy deli sandwiches until I was old enough to shop for myself. Those brands were all I knew.

Then, I learned of deli counters with freshly sliced cold cuts. I lived off of generic meats for a long time. Fast forward to life in Las Vegas, my grocers of choice sold Boar's Head, it touted as a premium deli meat. I was not a fan from the first bite and I'm still not one today. It's only the Turkey Pastrami that I'll buy on occasion. I find their meat bland or overly-salted. Few fall in the middle.

I love a good Italian. I've had fantastic sandwiches in San Diego and San Francisco, but I've struck out so many times, here, at home. The best around is at Siena Deli. It's good, but I can't help but think there must be better. The trouble is that a majority of delis make their sandwiches with Boar's Head meats and cheeses. Why would I go out of my way for sandwich I could make myself at home? It really boggles my mind.

When we went to New York I was so stoked for heros with imported meats, but we found the majority of the Italian delis there carried Boar's Head too. We were so disappointed. It wasn't until this week that I learned that Boar's Head started in New York City. Here I thought I was going to escape Boar's Head and I went directly to its home. Nice. I've been itching for a good sandwich since we've been back. This week, Frank and I each scoped out a deli. He went to Cugino's and I went to LaDuca's. Both proudly serve Boar's Head. Fantastic. Just fantastic.

When I went to LaDuca's I wanted more than a "meh" experience so I went with an eggplant parm sandwich instead. 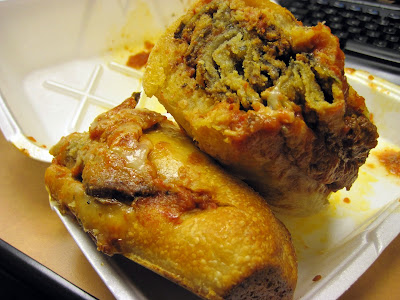 It was a sloppy mess by the time I got it back to my desk to eat. The bread was fine, but the eggplant had that awful greasy taste I hate. It was a bummer. I had a "meh" sandwich after all.

I see a trip to Siena Deli in my future.
Posted by Kellee at 3:16 PM