It was apparent that we were still on west coast time when we slept until 10:30. Even after seven nights we never adjusted. I think the earliest we were ever up was 9:30, but I digress. It was a first full day we were excited to see the city in daylight. We grabbed a bite at Zabar’s café. I thought they’d offer more than soups and Paninis, but we gave it a try. 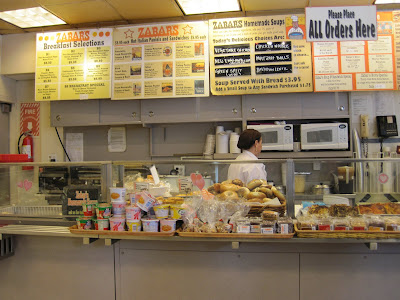 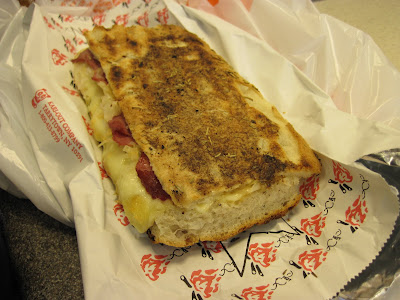 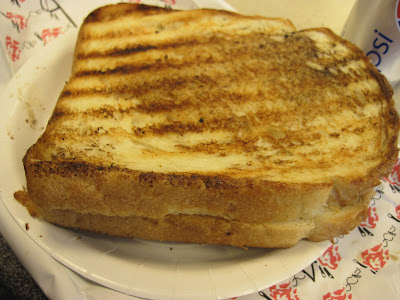 Frank had the Rueben, which wasn’t very good and I had a croque monsieur. I’ve had tastier, but it was certainly the better choice. The store was mobbed so we didn’t have a look. Instead, we caught the crosstown bus to Central Park. 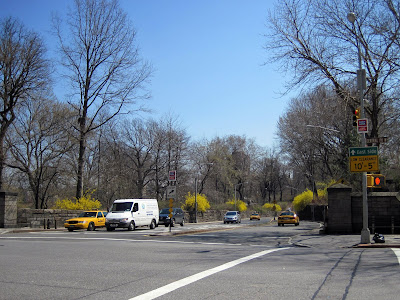 We found ourselves at the Jacqueline Kennedy Onassis Reservoir. We dodged runners as we walked around the lower half of the reservoir. 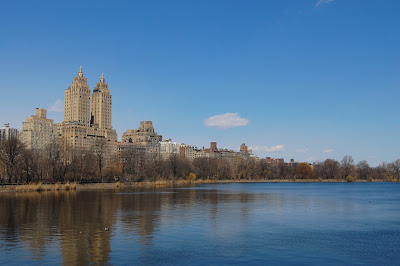 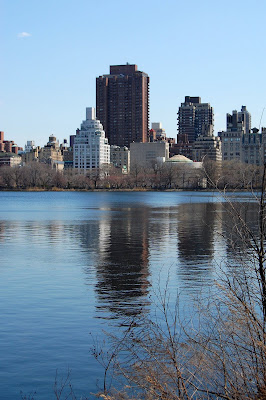 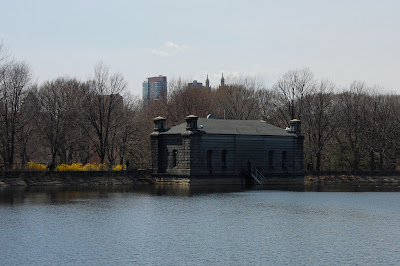 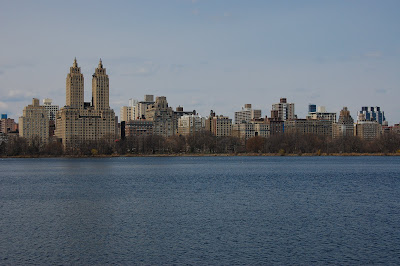 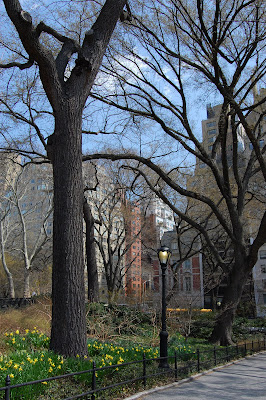 The cold air, dead trees, and leaf covered ground reminded me that spring had not yet sprung in NYC. I’m sure Central Park is lovely when everything is in bloom or in the fall when the autumn leaves display their array of colors. But on this day, it was cold and dreary despite the blue skies that eventually broke through the clouds. The bright spot was a patch of daffodils and yellow flowering bushes that were scattered all over the park.

Soon after we found ourselves at a Museum, but we weren’t sure which it was. There was no signage to make it clear. Our plan was to save the museums for when it was rainy. So, we didn’t stay long. Instead, we located the Subway and headed to the financial district.

When we came up from the depths we were at St. Paul’s Church. Not only is it the oldest surviving church in Manhattan (built in 1764), but it is also located directly across from the World Trade Center site. After 9/11 it served as a place of rest and refuge for recovery workers. 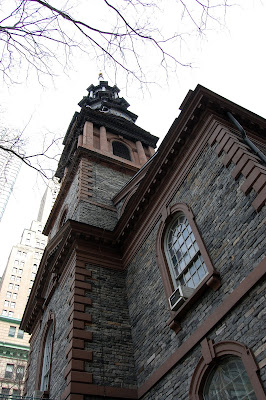 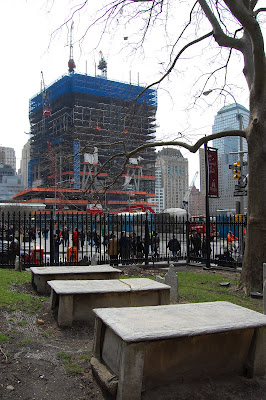 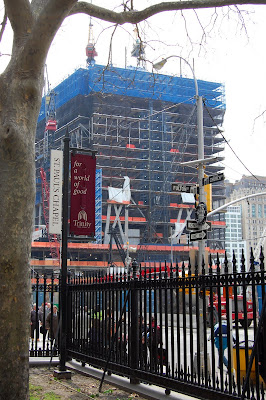 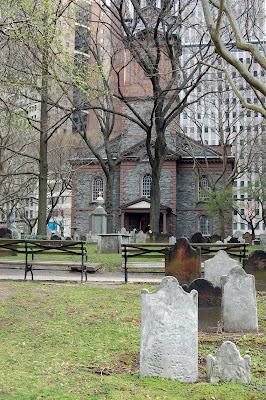 From there we crossed the street. We gazed between the construction fences to see the buildings being erected from the ashes. Six new buildings and a memorial are being constructed. Freedom Tower is furthest along, but it still has a long time to go before completion. It was heart wrenching and inspiring to stand where the twin towers once hovered above. I've grasped the affect the tragedy had on America, but not to the extent that was felt in NYC. Yet, there were hundreds of folks working hard to restore what had once been, all the while etching the memory of all of those lost that fateful day. 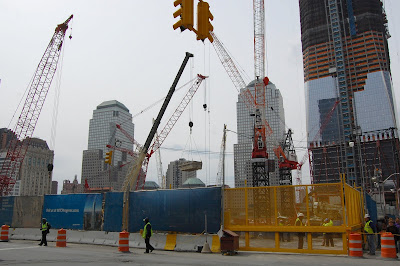 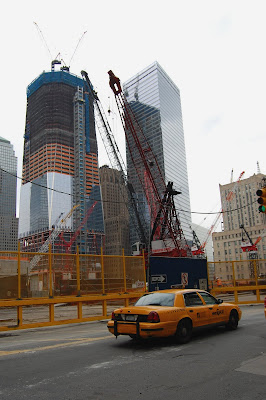 After paying our respects we wandered about, Frank had his first food stand hot dog and it wasn’t very good. 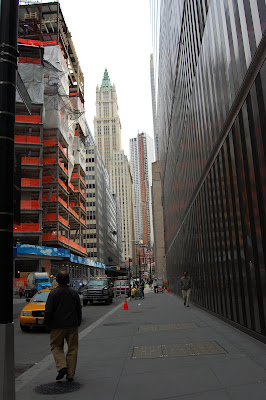 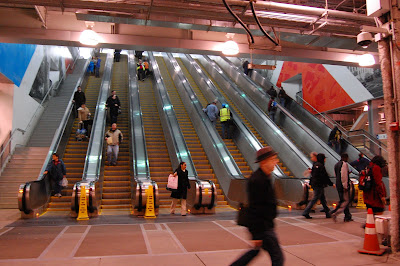 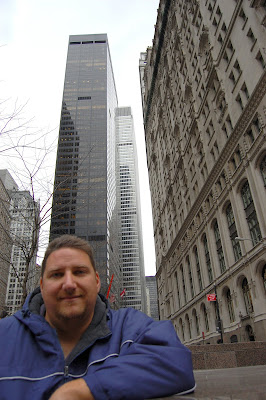 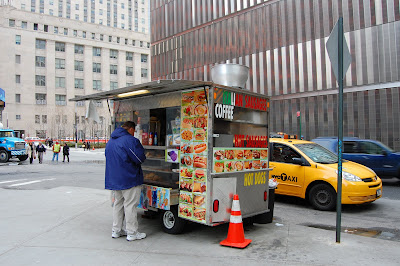 Then, we headed back to the UWS. We grabbed a bite at Artie’s Delicatessen. We shared a pastrami reuben and an order of potato pancakes. 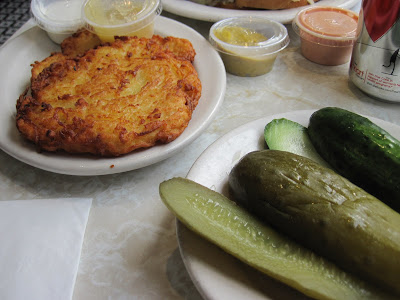 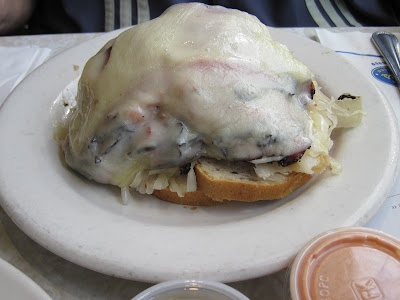 The pancakes were bland and extra cakey. The pastrami and other components of the reuben were mediocre at best. We made our way back to the hotel; we rested and warmed up a bit before leaving for the Times Square area to see The Book of Mormon at the Eugene O’Neil Theater. We made reservations to dine at II Gattopardo after the show.

It was drizzling, windy and still cold when we made it to 42nd; we had time to spare before the show so I search for yummy pizza slices. Yelp led us to Patzeria Perfect Pizza. It’s a teeny tiny shop. We took two slices to go. Both the white and margherita were delicious. It was one of the cheaper places we ate and offered some of the better slices we ate during the whole trip. As much as I enjoyed the slice, I didn’t enjoy the crowds in Time Square. Everyone had umbrellas and I was sure I was going to lose an eye. We took the back way back to the theater and it was a much more enjoyable stroll, despite the yucky weather.

The Eugene O’Neil Theater is small. So, most seats are good ones. We had seats in the orchestra, seating was tight but otherwise I couldn’t complain. Frank left to use the bathroom before the show, and it turns out he peed next to Jeff Goldbloom, but didn’t realize it was him until he got mobbed by fans. The audience was fairly star-studded I heard James Lipton, Susan Sarandon and Steve Martin were also in attendance. The Book of Mormon is a musical by Trey Parker and Matt Stone. It also has some of the same people from Avenue Q behind it. Avenue Q is my favorite production, so I was really excited to see the show. It did not disappoint. It pokes fun at the Mormon religion, of course, but also on stereotypes and the Lion King. It was very funny. However, Avenue Q remains my favorite.

From the theater, we walked over to the restaurant. I was happy to arrive and get a break from the cold and rain. At 10 o’clock the restaurant was busy. We took this as a good sign. Other than pizza we hadn’t had anything particularly tasty up to this point, we were eager for good food. 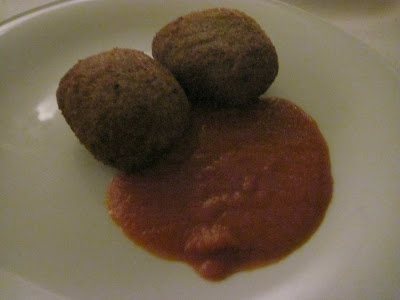 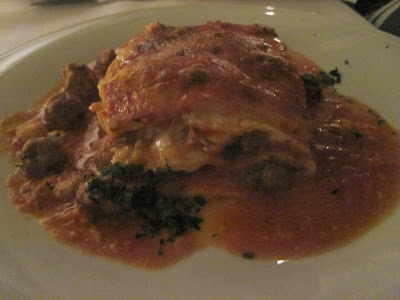 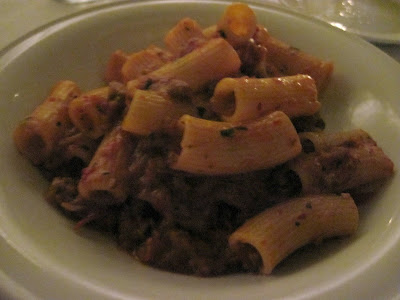 We started with Eggplant and buffalo ricotta cakes, they sounded a lot better than they tasted. I had hoped for more eggplant taste. Next up was Rigatoni with Anduja sausage and Lasagna with meatballs. The sausage and meatballs were very tasty. Generally, I do not like meatballs in restaurants – I find them too meaty, bready or bland – but these were quite good. They had a nice texture and flavor. It was a decent meal. The highlight, however, was discovering NYC tap water. It’s seriously good and refreshing.

After our late dinner, we returned to the hotel. Our feet we aching and I couldn’t tolerate the cold damp air any longer. We retreated to our warm dry bed.
Posted by Kellee at 1:17 PM

Sounds like you guys did a ton of walking. I'm curious to know how much, for example, were those meatballs? I mean, is it reasonably priced food? I love rigatoni, and that picture makes me hungry.

We walked, and walked... then, walked some more. I expected a lot of walking and it was beyond anything I could've imagined.

Everything was pricey! And we chose places with moderate prices to soften the expense of hotel, entertainment and wd50. Il Gattopardo prices were what you might expect on the Strip. Our app was $12, the lasagna was $21 and the Rigatoni was $22.