Days before we were set to leave for NYC, I made a reservation for Daniel. Frank and I had been drooling over the pressed duck featured on Best Thing I Ever Ate since it had aired. When I was gathering my list of restaurants to try, places to see and things to do, I came across a blurb that Daniel no longer served pressed duck. I called to confirm, it was true. Despite stellar reviews we cancelled our reservations. Wd50 was my other choice for a splurge meal, but I had waited too long for reservations… all I could do was try the waiting list and hope something would become available. I had my name added for Thursday.

This began our trip of alternate plans.

Our Southwest flight had a connection in Chicago before going on to LaGuardia. Everything went smoothly before arriving at Midway. I was even complimented by TSA how well I pack. I successfully packed us seven days’ worth of clothing in two small carryon suitcases, and placed my liquids and gels in a separate bag as suggested. Rolling is my secret. Anyhow, we had Chicago dogs, beef sandwich and fries for lunch. It wasn’t too bad considering it was airport food. We headed to our gate, only to learn that we were 6 hours delayed; due to traffic control issues at LGA. We asked if there were alternatives to getting to NYC. It was suggested that we fly to Long Island and take the LIRR to Manhattan. We searched flight times and train schedules and found a way to make it work. Only to have our plan change when we went to exchange boarding passes… There was a flight to Newark leaving in minutes. Since we had no checked baggage Southwest felt it was our best bet. We ran with it. Literally. We were last to board a full plane so that meant my tightly packed carry-ons would be checked and we’d be squeezed between strangers. But we were on our way and that’s what mattered. We arrived in Newark, our bags even made it. We hopped on the train and we were Manhattan-bound.

The Rat Race began at Penn Station. Our Google Map App was rendered useless in the subway – we never had a signal underground. We navigated the platforms the best we could and dodged the mobs by zigging and zagging, wheeling our luggage behind us. We bought our Metrocard (7 days unlimited $29) and hopped on the 1 train uptown. About 15 minutes later, we climbed the first of many stairs that led us above ground. 79th & Broadway, we had arrived. With no sense of direction. We walked the wrong way; I spotted Zabar’s and H & H Bagel. Places I had heard we must try. It was much too late now, they had been long closed, but I made a mental note for another time. We turned ourselves around and found our hotel, Hotel Belleclaire. The location at 77th and Broadway was convenient, the subway was two blocks away and there was a grocery store, pharmacy and 24 hour eateries nearby.

We checked in, our room was on the 7th floor. This was only a problem because the hotel is undergoing renovations and one elevator was out of service which led to long waits. Our king room was larger than I had imagined. There was even a closet and a small refrigerator. I unpacked our suitcases and we headed out in search of food. I rely on Yelp on all of our travels, it has never failed me. My first search led us to Land Thai Kitchen. When we arrived, we learned it was closed for renovations. Next, we went to Flor De Mayo. I had made note of it previously, it was Zagat rated and I had heard praises for it unusual blend of Chinese and Peruvian style of cooking.

Flor De Mayo is a quaint place, the staff was friendlier than expected since signs were posted that gratuity was included on the check. I ordered a combination plate of Roast Pork Chow Mein, fried rice and egg roll. Frank had sweet & sour chicken with plantains. 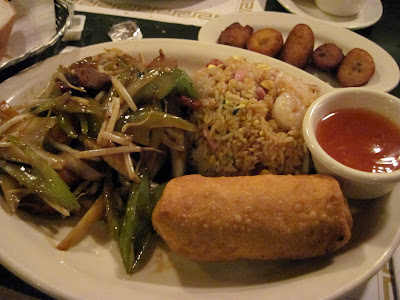 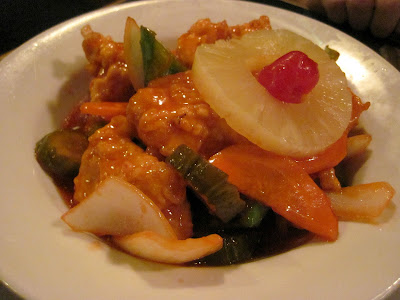 At first glance, both resembled dishes we’ve had before. Only this had a twist with every bite. The plantains and fried rice were highlights. Frank’s dish was better than mine, mine was heavily salted. We paid our tab, and hopped on the 1 train downtown, Empire State Building was our destination. As soon as we came up from the subway we were hit with an arctic blast of cold wind. The winds never let up. I was freezing. I had packed for temps in the 50’s and above. Not for freezing wind chills. We stopped at Starbucks to warm up with a large mocha cappuccino. I had been warned about the lines at the Empire State Building, but there were none when we got there. We walked right up to the ticket window and exchanged our City Pass Voucher ($79) for our booklets containing admissions to all the popular attractions. We proceeded right up to the observation deck. The indoor deck didn’t offer much of a view due to the glare off the glass windows. We stepped outside and I tried to be a trooper, but it was so cold I couldn’t hold the camera steady for quality shots. It was likely the quickest tour of the Empire State Building ever. What's most impressive that it was constructed in 14 months. That’s really incredible considering project schedules today. 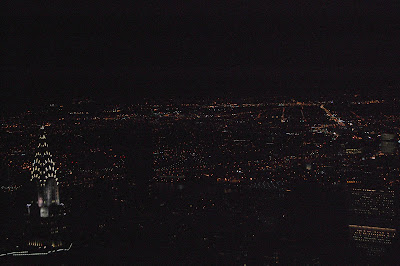 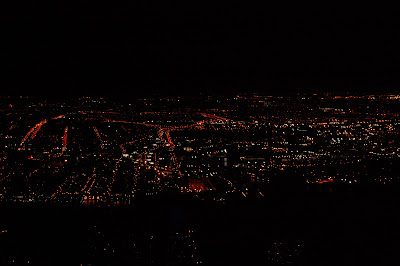 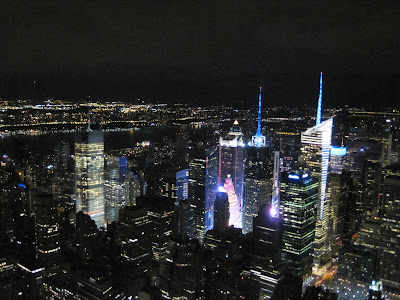 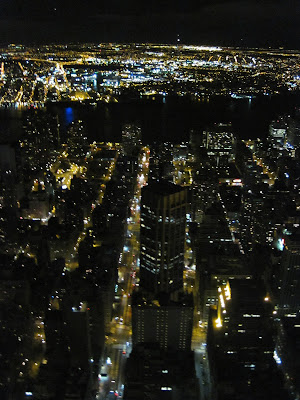 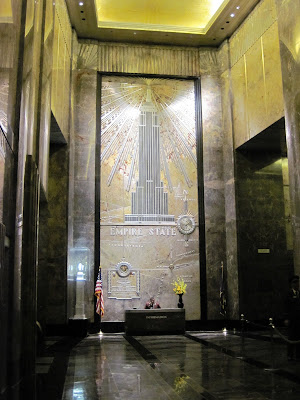 I suggested we grab a beer at the Heartland Brewery downstairs to warm up a bit before heading back to the Upper West Side. We walk in only to find it has closed. We headed back toward the hotel and came across EuroPan; we popped in for a slice. Turns out NY style was better than expected and I’m actually a big fan of Margherita Pizza. 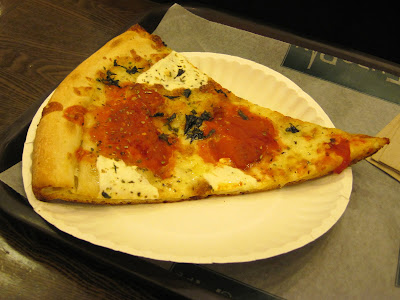 Next, we stopped at Amsterdam Ale House for drinks. We were happy to learn that last call wasn’t until 4am. There were only a few people at the bar, which was nice. I later learned there was only the men’s restroom available to use, that wasn’t so nice. We did, however, enjoy a few beers we had never tried before two hefes for Frank that I can’t recall and a Brooklyn Lager and Yuengling for me. We both had an American Joe Pilsner or something along those lines. The Yuengling became a fast favorite of mine. When we were walking back to the hotel Big Nick’s caught our eye. The menu is extensive, practically endless. I wasn’t terribly hungry so I opted for a slice of Sicilian pizza. Frank ordered an eggplant and sausage sandwich. 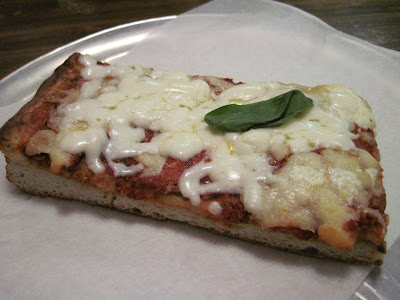 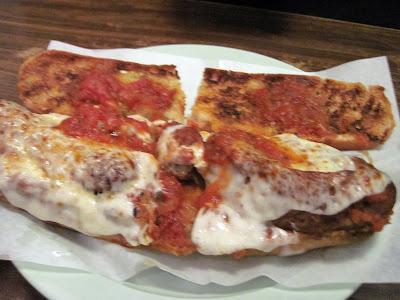 We had high hopes for both until they arrived and neither was very good. It was after 2 o’clock, we were pretty beat after our travels so we turned in, excited for what was to come.
Posted by Kellee at 3:55 PM