How do you do it?

We're having our first true cold spell, temperatures dipped below freezing last night and are forecasted to do so again tonight. Frank wrapped our exposed pipes and set the pool filter to run all night. So far, so good. We learned the lesson of preparedness last year when the sprinkler pipe burst.

The cold front was in full force yesterday. It was damn cold. We're all bundled up, and each year it seems colder. My blood keeps thinning. I really don't know how all of you back east deal with the winter - negative temps, sleet, and snow. Really, how do you do it? I can barely deal with 40's and strong winds. Winter hasn't even officially begun and I'm already counting down the days until summer returns.

Even Frank was all bundled yesterday, he broke down and bought a coat this year. He broke it in yesterday and was still chilled. We went out for lunch, I wanted to try this little taco shop I had heard good about. It is Taqueria Los Parados at Sahara/Valley View. We sought it out, only to find it has closed. It's a shame, I never got to try their carne asada or shrimp tacos. I heard they were fantastic. Nearby is Vinny Boy's Italian Deli, we tried that instead. I ordered an Italian sub which came with pasta salad. Frank had eggplant parm, it came with garlic knots. I make better sandwiches. The eggplant was tough, and the sauce was super acidic. We won't be back. 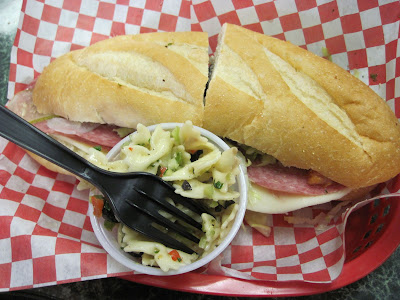 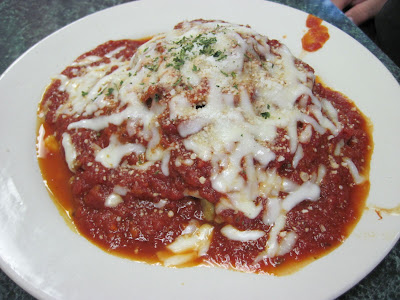 Fortunately, better eats are planned for tomorrow. I was originally cooking for ten, but I'm down to nine. I'm hopeful everything is a success. Happy Thanksgiving all! Enjoy the holiday!
Posted by Kellee at 1:17 PM