Anyone who knows me, knows I don't like fast-food. I make exceptions for In-N-Out and White Castle (when I'm back home). Life is too short to eat bad food, I do not like Burger King, Wendy's or McDonald's much to my nephew's dismay.

The other day we had this exchange...

Nicky: Do you like McDonald's?
Me: No.
Nicky: You don't like their hamburgers?
Me: No
Nicky: Not even chicken nuggets? (his favorite)
Me: Nope.
Nicky: (completely dumbfounded) Why?
Me: I just don't like the taste.
Nicky: Silence. Soon, Amy was on the line. He was done with me.

It's been 8 or 9 years since I had McDonald's. Well, I take that back. Four years ago, the day my nephew was born, I had McDonald's breakfast. It was his mommy's choice. You do not second guess a mommy-to-be on her delivery day. I guess the boy was even a fan back then.

Anyway, Frank's been grabbing lunch at Raising Cane's every now and then. He urged me to try it. After quite a bit of convincing, I finally did. It was nothing like KFC which is what I expected. We went to the location on Flamingo near Maryland Pkwy. 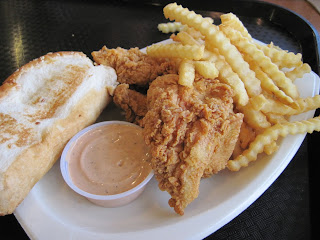 Another odd quirk I have is I do not like chicken on the bone. Wings, thighs, drumsticks -- none of it. Chicken is also my least favorite protein. So, it's not something I often enjoy. At Raising Cane's all they do is Chicken Fingers. It's kind of like it was made for me. All white meat chicken, never frozen and lightly breaded and fried to order. I had the three finger box, sounds dirty, doesn't it? Once I got my head out of the gutter I was able to enjoy it.

It was crisp without being greasy, and juicy on the inside. Their sauce is pretty good, I like the peppery-ness of it. Although, I felt like it could use some smoke flavor. BBQ sauce and chicken fingers just go hand in hand. I suppose, honey mustard does, too. The fingers came with crinkle fries, crisp and light in the center just the way I like 'em. You can tell they fry in fresh oil, too. I always appreciate that. I also had a side of Texas Toast. It's light and airy, brushed with butter and garlic. It's so good. Yum.

I've since learned Raising Cane's got its start in Baton Rouge, LA. The founder was told by banks and his teacher that a chicken finger business would never work. He raised much of his own funds and showed them. I love stories about people who were told the can't, but prove they can.

I love your commentaries on food. Being in upstate NY we do not have a Raising Cane's but we sure do have McDonald's, Wendy's, BK, Taco Bell. What I love is SONICS which we do not have either. I have to go down south for that. LOL

We have Sonic here, too. I tried a burger from there once I wasn't a fan. Frank loves their slushy Powerade drinks.

If you're ever hungry and near a Raising Cane's it's worth a stop. If you enjoy chicken fingers, anyway.

We've had our Cane's for about 6 months now and I LOVE it. A little pricey for fast food, but worth every penny.....