Summertime! And the living is easy

We had a great taste of summer this weekend. The weather was perfect. The pool was 75 degrees Sunday afternoon, Frank jumped in, if he heated it today, I'll get my feet wet after work. We had a great day with Vegas Valley 4 Wheelers running Potato Ridge. We were able to conquer rock gardens that we can't do solo. I'll share those photos tomorrow. Along with dinner details, we went back to Morels at Palazzo for a wonderful meal on their patio overlooking the strip.

Friday we went to M Resort to bet on the derby. We hung around, played video poker, blackjack, had a few drinks and I tried my luck on Cavemen Keno on our way out. I had two nice wins that brought me back to even. Frank lost, but we had fun. I Want Revenge scratched so we need return and get our money back. Another visit to M, ok, twist my arm... We love M, I hope things over there don't change - Frank has a theory that everyone is friendly and customer service is great because they're all on probation. I guess we'll find out in a couple months.

Saturday, we fired up our new grill. It provides us with much more room and a even heating surface. We'll get good use out of it this summer.


It was an ordeal getting it, but in the end it all worked out. See, we originally bought a grill from Sears. They had free assembly so we opted to do that. A few days later, they called to say the grill was available for pick up. We went to get it, only to find they tried to pawn off the floor model. We were under the impression the grill would be new, we did not want to pay full sales price for a grill that was dirty and dinged. We met with a manager who offered us 10%. We wanted more, she didn't budge so we returned it. We headed right over to Lowe's. They had a grill on clearance outside, it was just what we needed, actually larger than the one at Sears. We asked to have it marked down because it had been outside for sometime. They took $55 off the price. Sold! It wouldn't fit in the Suburban fully assembled. We considered rolling it home, we're close. But the guy helping us didn't skip a beat, he wheeled it over to a pay by the hour truck that was getting loaded for the morning, and they loaded the grill and followed us home, unloaded it and they were on their way. We were happy as can be. Talk about Customer Service, Sears should take note. We'll gladly shop at Lowes in the future. We tend to buy things there every now and again, but now they've earned priority in our home improvement shopping.

We also broke in a new blender I purchased from Amazon. After seven or eight years our old one died. I shopped around for the most powerful one I could turn up, an Oster Professional Series. 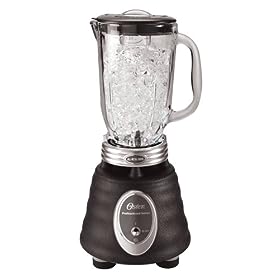 Frank's margaritas just got better. Amazing what can be done with a proper tool. This blender finely crushes ice in seconds. I have a feeling, it too, will get plenty of use this summer.
Posted by Kellee at 2:06 PM

With all the rental properties, my husband and in-laws are connoisseurs of all the local Lowes stores. The one down at the beach knows my in-laws well, and when they approach, they just start marking down all the clearance stuff because my in-laws will buy it all (cabinets, doors, windows, fridges - you name it, Lowes sells it, and it can be used in a rental house :-) I'm glad you like your grill! We just had to replace the ignitition system in ours (dangit, it's not that old either :-( I have great plans to grill more this summer - I'm not much of an outdoor chef, but we'll see....

That's great the take advantage of the deals.

Frank is king of the grill. I just prep everything and then he takes care of cooking it. It's nice, that way I can clean up while he tends to it. It allows us more time for fun. Last year, I found yummy kabob recipes, I hope to have more luck with marinades this year. And maybe come up with some new ideas.

My sister and her husband have the exact same model as you do and they bought it at Lowe's. They assembled theirs at home and found out that it had a ding. They went back to Lowe's returned it with no problem and received a new one on the spot. I'm glad that you gave it back to Sears - they should know better.

Kellee--my fave kabob recipe is curried shrimp with a mango dipping sauce - I'll dig it up and send to you (I haven't made it yet) I don't eat a lot of beef. A couple days ago, I grilled zucchini, baby portobellos, and spring onions. So yum!!

Lowes seems to know good customer service. I hope they keep it up.

Thanks, Kelly, that'll be great. It sounds good.

You will *love* the new Oster blender. I have one (mine's all silver, though) and it is a monster. Best blender you'll ever own.

Good to know. I was mighty impressed when we broke it in. I love that it has no buttons, just on and off. Who needs all the fluff, let it do one thing, and one thing well.